Network analytics tools are a valuable way to analyze the traffic patterns of an autonomous system. They can be used to gain valuable insights into ingress and egress traffic, identify potential peering relationships, and help in troubleshooting a network.

In investigating potential network analysis tools for Neptune Networks, I struggled to find something that was 1) up to date, and 2) wouldn’t break the bank. The first tool that I came across at the recommendation of a colleague was AS Stats, a series of perl scripts that generate RRD-based graphs. I opted not to go down this path as it’s unmaintained and I wasn’t confident I’d be able to get it working given it hasn’t been supported for a few years. The second tool I explored was Kentik, which is a beautiful cloud hosted solution but after chatting with their sales team, I learned that it costs tens of thousands of dollars for its most basic package 😱. I was disappointed to hear they didn’t have a more cost effective solution for autonomous systems with smaller amounts of traffic. The last tool I tried which proved quite promising was Elastiflow. Elastiflow is open source and is built on top of ELK (Elasticsearch, LogStash, and Kibana). While I was able to get this working successfully, I found that the amount of hardware required to operate this was far too much and would end up breaking the [hardware] bank.

In this article I explore creating a network analytics system with Prometheus and Grafana. Prometheus is a time series database complete with a query language (PromQL), and Grafana is a way to visualize that data. The end result is a dashboard that looks like this: 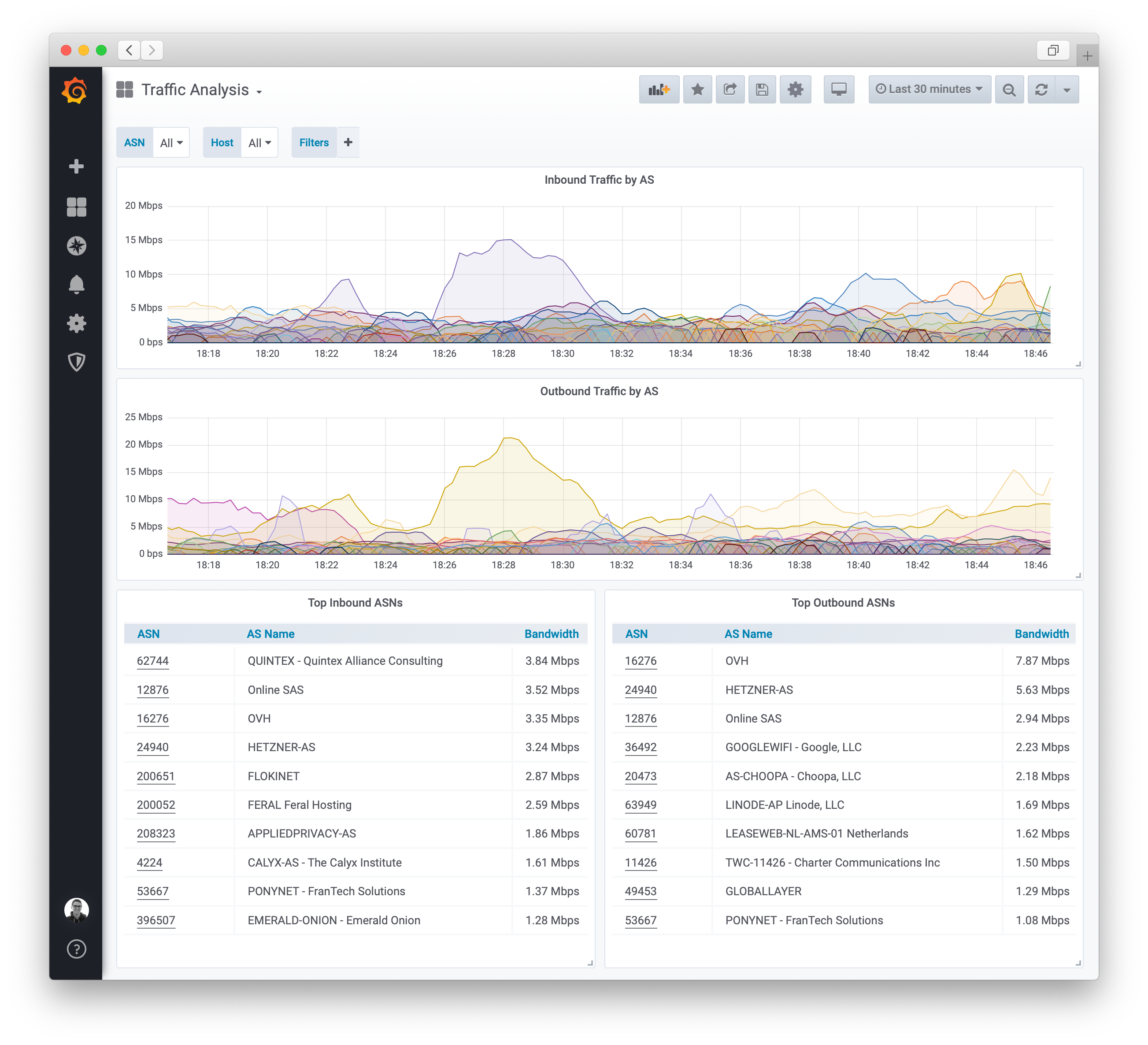 To accomplish this, the following tools are used:

Before digging in, it’s worth briefly introducing the autonomous system I was building this system for. Neptune Networks has four border routers with full routing tables and all external traffic passes through them. Each of these routers are Linux-based virtual machines running the BIRD routing daemon. Most conventional hardware routers have the ability to export what are called “flows” (Netflow, sFlow, IPFIX) to a collector. Because Linux has no built-in support for this, the first step was capturing the data that was flowing through these routers.

pmacct is a set of network monitoring tools that can collect network traffic via libpcap and export it to a variety of places. To power our network analysis tool, we’ll be collecting this data on each of our border routers and sending it to Kafka for later analysis. The pmacctd daemon also peers with our border routers over BGP in order to get an up-to-date routing table to associate prefixes with autonomous system numbers.

Let’s start by installing the pmacct suite on our border routers:

And then let’s set up a systemd service for pmacctd:

Now that we have pmacct installed, we can start working on the configuration file that will monitor the network interfaces and send the data to Kafka.

Let’s break down some of these configuration options.

The next group of configuration options create a BGP session between pmacctd and our border router. The border router passes its full routing table to pmacctd so that it can determine the autonomous systems of each flow it captures.

Pausing for a moment, you may be wondering what the other side of this BGP configuration looks like. In BIRD, we configure the other end of the session like so:

And lastly, we have a series of configuration options to send the flow data to Kafka.

Now that pmacctd is configured on our border routers, it can capture flows and send them to the Kafka host that we defined above.

Kafka is a distributed log that is designed to handle large amounts of incoming data. Data is sent to the Kafka “broker” and “consumers” read this data from the broker and do whatever they please with it.

We’ll be using Flow Exporter as our Kafka consumer. It keeps a tally of all traffic categorized by ASN and figures out the name of the autonomous system from the RIR. It then takes this data and makes it available to Prometheus which scrapes it at a regular interval.

Let’s stand up each of these services.

You have a few options for creating a Kafka broker. You can use an off-the-shelf Kafka host like Heroku Kafka or stand your own up in a Docker container. You should not need to concern yourself much with disk space, as the retention for Kafka will be quite short since the data will be stored in Prometheus. Kafka is just an intermediary.

Should you decide to use Docker, you can use the following Docker Compose file for Kafka, Flow Exporter, and Prometheus.

Be sure to swap out some of the arguments to the commands. Specifically you’ll need to specify the FQDN that you intend to have your Kafka broker on (OUTSIDE://kafka.fqdn.com:9092), and the ASN you are monitoring flows from (--asn=397143).

Also don’t forget to open ports in your firewall so that your border routers can communicate with Kafka.

And lastly, you’ll need to configure Prometheus to scrape the data coming out of Flow Exporter:

Now that all of the configuration options are in place, we can start pmacctd:

We can validate that this worked properly with the kafkacat tool. Similar to netcat, kafkacat will let you consume a given topic of a Kaffka broker:

Keep an eye out for the appropriate AS values in as_src and as_dst. A value of zero may take some tweaking to the bgp_agent_map part of your pmacct configuration.

Now the fun part, loading the data in Grafana.

If you already have a Grafana instance set up I’ve put together a shared dashboard here. You should be able to add it by hovering over the + on the sidebar and choosing “import” and pasting in 11206 as the “Grafana.com Dashboard”.

And that’s it! You’ll be able to filter the dashboard by AS and host, which can be valuable to determine potential peering relationships should you be present on an internet exchange or in the same datacenter for private peering.

I hope this is helpful. Feel free to open an issue in https://github.com/neptune-networks/flow-exporter/issues.